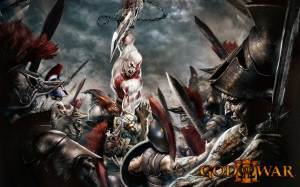 It’s very rare for me to play a game and complete it in 3 days. Some might argue that some games are truly short and that you can complete it within that time frame. There is just now way you can complete an epic RPG in that time, unless you play for 3 days straight without sleeping. But to summarise my experience of playing God of War III (GOWIII), I would only use one word to describe the game, and even that word is a gross understatement: EPIC.

Let’s see… this past few months, after playing GOWIII, I can recall only 2 other games that gives me the feeling of satisfaction in completing a game. The other two are Assassin’s Creed II and Uncharted II. While Uncharted II excels in making the movie-like storyline epic, and Assassin’s Creed II in its epic historical setting. GOW III blows everything out of proportions when it comes to epic. Everything from the sound, to the music, visuals, actions, and set pieces, everthing screams of epic and big. The first 20 minutes of gameplay in GOWIII almost gave me a heart attack. I wasn’t expecting a grand opening of downing your first boss, Poseidon on top of Titan Gaia. Poseidon itself is a formidable huge boss and you are fighting on the backs of an even bigger giant entity, a Titan. Words cannot describe how I felt playing the game during the first half and hour or so.

Completing the game in 3 days could mean one of two things: Either the game is short, or I lost track of time spent on the immersive game. I suspect the latter because I was quite certain the game was not that short to begin with. I think I just lost track of time while playing it. Determining how far of a progression I have made in the game was impossible when you are so into the game.

How I wish I could have picked this game up sooner. I knew it was gonna be good, but not this good. Having spent time playing the first 2 installments, I thought they might have reached a barrier to the level of creativity poured into the franchise, but I was totally wrong. With the PS3, and its powerful system, the visuals are astounding. Cut-scenes are rendered in-game and there are moments where there is so much going on in the visuals and effects department that you just gaped at the sheer detail that is being rendered by the PS3, all the time wondering how it was all possible in the first place.