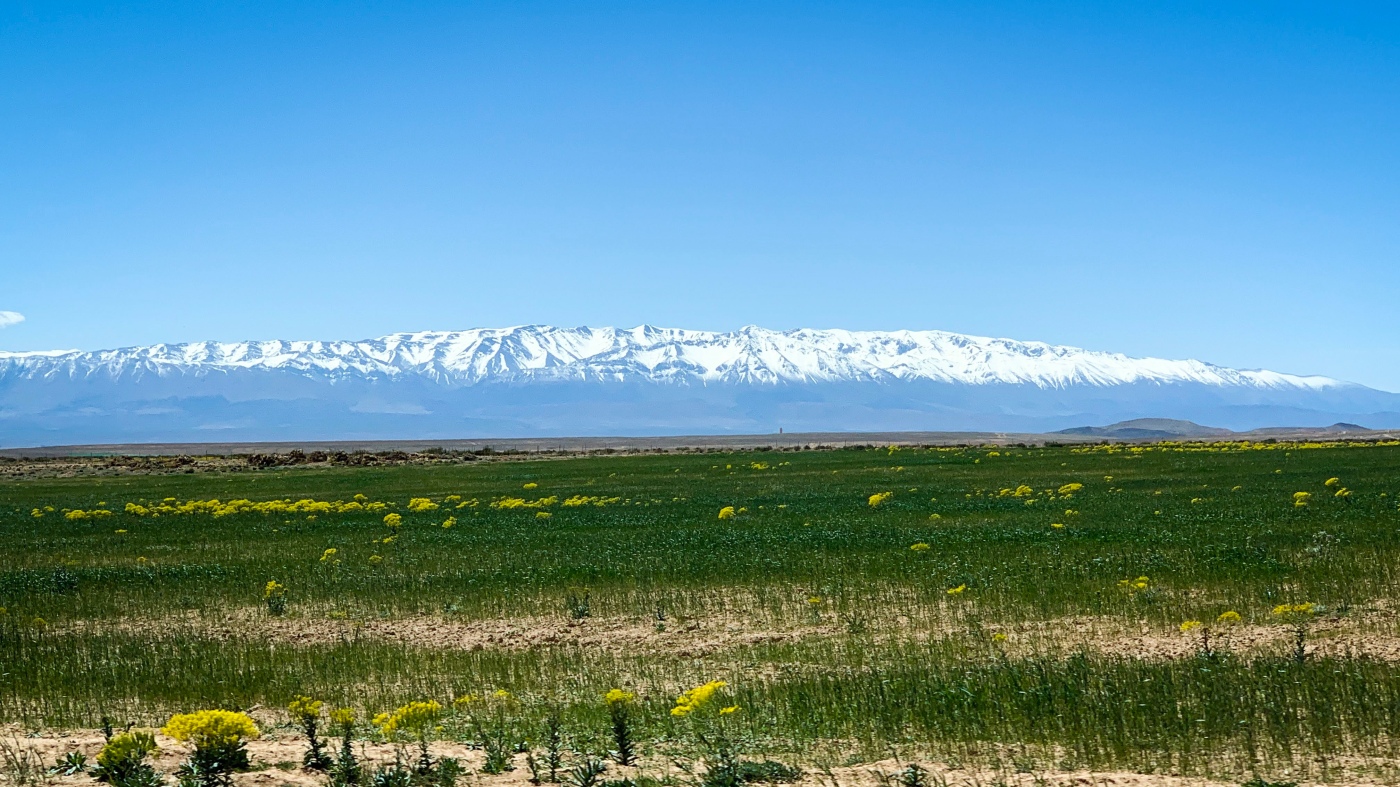 It was time to say goodbye to our rental car. Good riddance! While I enjoyed driving for the most parts in Morocco, it was especially stressful when approaching a major city. The chaos, the hustle and bustle, the honking, coupled with the fact that I needed to drive a manual car, all added up to the pressure and stress of trying not to hit anything.

Today, we departed Fez to begin our desert tour. We no longer had to drive. We were being driven. We booked a guided tour from a tour company called Authentic Sahara Tours and booked the 3-day Fez to Marrakech via Merzouga tour. We modified the tour to add an additional night, so that we would have more time to explore the desert areas of Morocco.

It was a private tour with our own private van. Abdul, our tour guide and driver was waiting for us outside the main gate of the entrance to Fez Medina. He was punctual which we appreciate a lot, especially with all our luggage and bags.

Abdul was extremely friendly. Always smiling. Middle age man with a bald head. You can tell from his personality that he is a family person. He spoke a decent amount of English could easily be understood, which was a plus, because as the tour progressed, we were asking him about his life and his job and everything else under the sun. Abdul quickly became our friend and to him, his extended family. He no longer became a tour guide showing the country, but rather a friend showing his overseas friends his beautiful country and his way of life.

Our 4-day desert tour began early in the morning and as soon as we departed from Fez, we were driving past fields, and forests, over hills and rocky terrain. Soon, the famed Atlas Mountain was in full view. It was beautiful. It was spring going summer, and while we could see the mountains capped with snow, by the time we reached marrakech 4 days later, those were largely gone. The seasons were quickly changing.

I remember driving to a town called Ifrane. Touted as the little Switzerland, it is actually home to a ski resort. We were there during spring so there weren’t any snow. But it was strangely cold in Ifrane despite the spring-summer season. The town was beautiful and looked as if you could be in some town in Switzerland. However, we didn’t stay long and had to continue our way to the desert.

By late afternoon, we reached the dunes of Erg Chebbi. It was a long drive. The longest despite being only the first day. This is partly because our overnight desert stay was schedule on the first night of the tour and the drive from Fez to Merzouga was pretty far.

But nonetheless, despite the distance, I was awestruck by the changing landscape. It got drier as we drove deeper into the country. What started out as lush green fields and forests on the coastal areas of Morocco, made way to scraggly, dry, rocky terrain in the country’s interior. The color changes as well from forest green to beige, brown and red. The landscape became raw. But even then, we saw something spectacular. Oases. Oases of varying sizes. It was beautiful. Imagine looking over the horizon, seeing nothing but red, raw earth and suddenly you saw patches of green, filled with lush fields, plantations, and forests in the middle of nowhere. No, it was not an illusion. It was an actual oasis. I have never seen anything like it.

Once we arrived on the sand dunes of Erg Chebbi, we were off-loaded including all our stuff on a 4×4 Jeep. We were taken deeper into the desert, where packs of camels roped in a line were waiting for us. I have never sat on a camel before. Everything was new to me. I now know that the camel had to sit before you can actually mount and sit on the camel. Once you are comfortably seated, the camel guide will make the camel stand, first on its hind legs, then on the front. As it attempts to stand up, you get lurched violently to the front, then to the back. I had to hold the handle secured in front of me to prevent myself from falling either to the front of back as the camel tries to stand up.

The hour-long camel ride was exhilarating! The sand dunes were spectacular and the camel ride was one of the most relaxing things I have ever done in Morocco.

During the hour-long ride into the desert on our camels, the Camel guide stopped for a short while to allow us to take photos of the desert, play on the sand dunes and just enjoy the sunset views. Watching the sunset in the desert was truly a magical experience, one that I will never forget.

At the end of the exhilarating camel ride, we reached our desert accommodation. It was a series of luxurious tents with its own bathroom attached to it and a bonfire in the middle of the encampment. We had a sumptuous dinner in the main tent, with about 10 other guests who were staying with us for the night.

Soon after that we sat around the bonfire enjoying the heat of the fire as the desert air grew colder all around us. The hosts of the encampment started playing traditional Berber music for us. We clapped and cheered with them as they played, soaking in the revelry as the night deepened.