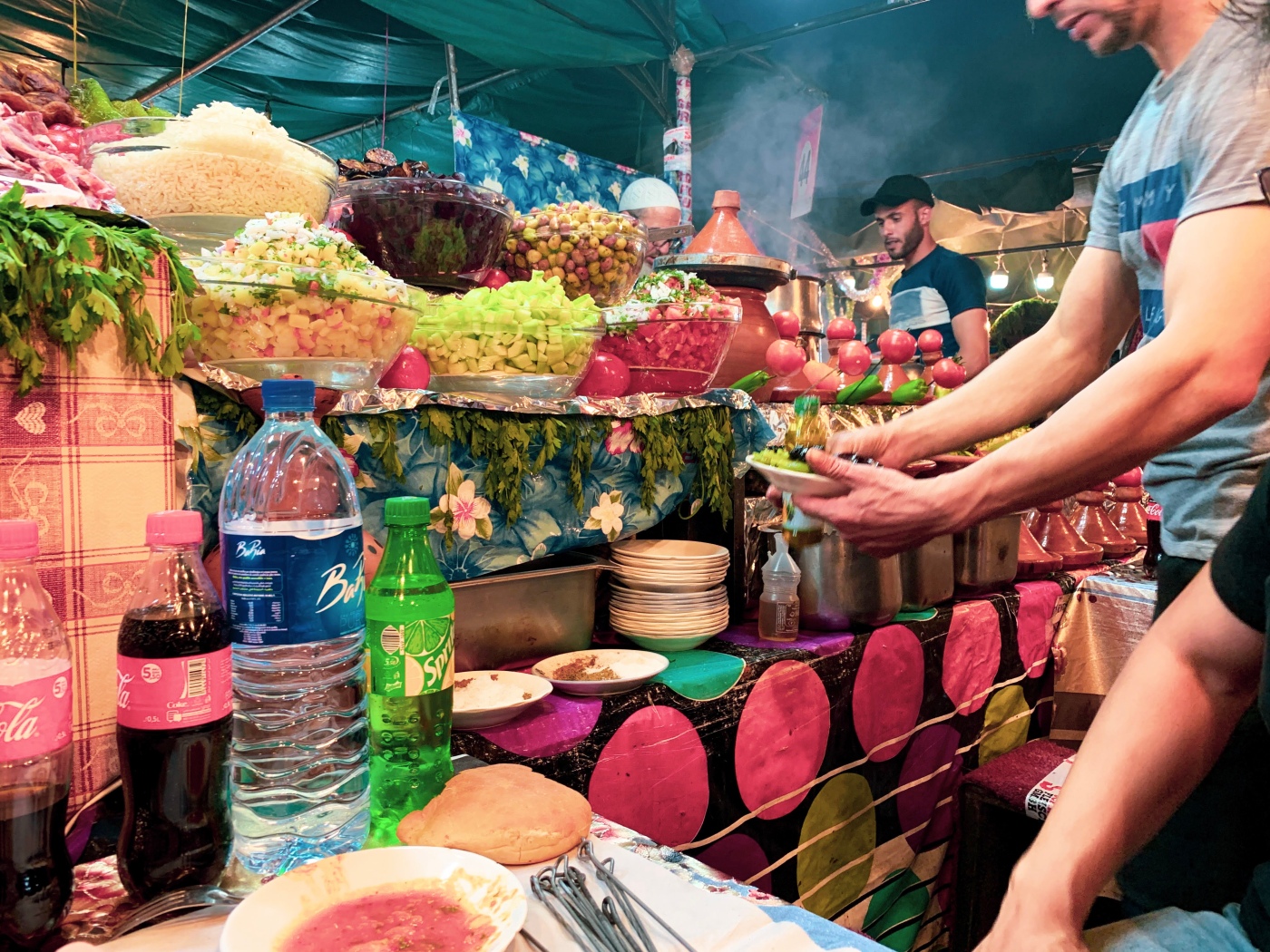 Marrakesh was our final stop before taking the train back to Casablanca to catch our flight back home.

It was hot. It was the first time since we arrived in morocco that the weather was swelteringly hot. While we were in the desert, it was cool, cold even sometimes especially before dawn. The sudden change in temperature from the more temperate climate of the countryside to the warm and humid air of Marrakesh, was probably the cause of my illness. Coupled with the fact that I was exposed to intermittent rain upon arrival in the evening made things worse.

By the second day of exploring Marrakesh, I started getting fever. I did not feel well at all. You could say that I was lucky in a sense that I fell sick at the end of our trip. But having a temperature and a feeling of malaise really put a dampener on a lot of things. I brought Panadol just in case these things happen during our trip and it helped a lot in controlling my temperature and numbing some of the achy feelings that I had. This general feeling of malaise made it hard for me to really enjoy Marrakesh fully.

We continued our exploration of Marrakesh, visiting the Medinas and the street food that truly became a bustling sight as day turned to night. The open square just outside the Medina was transformed into an outdoor street food market, with a ton of stalls setting up for the evening and touting locals and visitors alike to a wide array of skewered meat and vegetables, seafood, and an array of other snacks.

We also visited their shopping district and urban Centers and even had Chinese cuisine that we encountered by accident while exploring the city. At that moment while walking along their shopping district, it all felt familiar, an urban district you see in any other city. Modern, bustling, and crowded with tourists and locals. It was nice to see international brands that have set up shop in Marrakesh, like Zara and H&M giving it a sense of familiarity.

We had a couple of days in Marrakesh before we had to catch a train to Casablanca. The train ride was pleasant. The journey took just a couple of hours. We hailed a cab upon reaching the train station at Casablanca and headed to our hotel, the same hotel where we started this entire journey. Arriving back at the same hotel was a bittersweet moment for me. It was a reminder of our journey when we first arrive, and also a reminder that our journey is ending. I felt sad for having to leaving Morocco. The country has given us so much more than we initially thought. The memories that we create in this country were simply priceless.

Still, it was time to go. I was still feeling sick, off and on at times, depending if there was still paracetamol coursing through my veins. The medication helped a great deal in getting through the day, but its fading effect can be felt, in regular intervals that served as a reminder to take another dose of the drug before the fever and malaise kicks in again. Perhaps the illness that I had was an illness of the heart? My heart yearned to stay just a little longer in this beautiful country. And now knowing that it was time to leave, I was feeling heartsick.

Things were not all doom and gloom. There were still things to look forward to in London. For me I was most looking forward to seeing my former colleagues who used to work in Singapore. It’s been a couple of years since they left Singapore to go back home to London, and I was excited to see them again over lunch and dinner.

We arrive sometime mid-morning to early afternoon. It was my first time in London. I was fascinated by the London Tube. It was confusing as hell and it took me a while to understand it and navigate London using the Tube. We stayed at an Airbnb just off central London where it was cheaper, in one of the suburbs. It was a pleasant house with extra rooms to spare for us four. There was a small cinema just outside our accommodation which we watched Avengers: Endgame. We were tortured by the need to minimise our exposure to spoilers on social media during our holiday in Morocco, since the movie was released during our holiday there. But when we were in London, we took the earliest available opportunity to watch the movie and be relieved of any accidental spoilers we might have read on social media.

We had only a full day in London and we made the best use of it. We met up with our former colleagues for lunch at Padella, visited the Tates Museum, visited a few famous pubs and had a few rounds of beer. Finally we headed to Din Tai Fung for dinner, capping off with more rounds of beer at a local pub nearby. It was a fantastic day. I was so glad to be reunited with them and to catch up on what was happening with their lives over meals. We were also excited to share our travel stories (which we had several funny ones) in Morocco with them. The entire evening was just full of jest and great conversations. Nobody wanted it to end. At the end of the day, we had to say our goodbyes, with no promise of seeing them anytime soon.

A 12-hour flight awaited us the next morning. We headed to London Heathrow and checked into our Malaysia Airlines flight bound to KL, Malaysia, before taking a connecting flight to Singapore.

Morocco is a country that keeps on giving. Give it time to explore and discover the country and you will be rewarded in spades. Going to Morocco for a holiday was one of the best decisions we as a group has ever made. The people that we met, the food that we tried, the culture that we immersed ourselves in, all culminated in us not simply enjoying our holiday, but also appreciate and understand different cultures and traditions. And that is what travelling is all about. We connect with people from far away lands, and in doing so, we understand each other a little bit better. And with that, you start to realise that it becomes easy to find a common thread in all of us, that everyone in this world is very different, but not so different as to be alien. Morocco certainly has changed me in many ways, broadening our minds, understanding culture that is world’s away, and having a greater appreciation for the kindness and generosity that was bestowed upon us in a foreign land. We are all ambassadors of our own country. Morocco has been a great host to us. No doubt we will do the same for travellers around the world coming to Singapore.

With that being said, I have many more pictures that I took that didn’t make the cut while writing all ten parts of my Moroccan adventure. However, you can visit this link to view the entire gallery.